An article from the Home Garden Seed Association (Spring 2012)

How often do you hear or find yourself wondering what is the difference between an heirloom and an open-pollinated seed variety, an F-1 hybrid and a “GMO?”  Misconceptions about these terms are rampant.  Breeding techniques continue to evolve, and the ethical debate on the long-term effects of this brave new world of hi-tech breeding will rage on.  One concrete way we as seed gardening professionals can help is by providing clarity.
Consider this a plain-language “go-to” resource. It will help set the record straight the next time someone refers to the “GMO Food Agenda” or asks the question, “Which is better, an heirloom or a hybrid?”  Seed choices abound, and gardeners deserve to make educated decisions about what is best for their own use.  The following is a list of common (and a few not-so-common) terms that you are likely to encounter.
Cultivar:  The word cultivar derives from the term “cultivated variety.”  A cultivar name is often presented as the “variety

name” with the genus and species in home garden seed catalogs.  In this example: “Grandpa Ott’s Morning Glory (Ipomoea purpurea),” the cultivar name is “Grandpa Ott’s.”  Described by the International Code of Nomenclature as an “assemblage of cultivated plants clearly distinguished by one or more characteristics, which, when reproduced, retains its distinguishing characteristics,” a seed-grown cultivar can be either a hybrid or open-pollinated variety.  So a cultivar is a cultivated variety with specific characteristics (a.k.a. “traits”).
GE (Genetically Engineered):  The terms GE and GMO frequently used interchangeably in the media, but they do not mean the same thing; it is modern Genetic Engineering that is the subject of much discussion.  Genetic Engineering describes the high-tech methods used in recent decades to incorporate genes directly into an organism.  The only way scientists can transfer genes between organisms that are not sexually compatible is to use recombinant DNA techniques.  The plants that result do not occur in nature; they are “genetically engineered” by human intervention and manipulation.  Examples of GE crops currently grown by agribusiness include corn modified with a naturally occurring soil bacterium for protection from corn borer damage (Bt-corn), and herbicide-resistant (“Roundup Ready”) soybeans, corn, cotton, canola, and alfalfa.  All of these are larger acreage, commercial crops. At the present time, home gardeners will not encounter any packets of GE seeds sold through home garden seed catalogs or garden center seed racks.
GMO (Genetically Modified Organism):

The USDA defines a GMO as an organism produced through any type of genetic modification, whether by high-tech modern genetic engineering, OR long time traditional plant breeding methods.  While you often hear the GE and GMO used interchangeably, they have different meanings.  For hundreds of years, genes have been manipulated empirically by plant breeders who monitor their effects on specific characteristics or traits of the organism to improve productivity, quality, or performance.  When plant breeders, working with conventional or organically produced varieties, select for traits like uniformity or disease resistance in an open-pollinated variety or create a hybrid cross between two cultivars, they are making the same kind of selections which can also occur in nature; in other words, they are genetically modifying organisms and this is where the term GMO actually applies.  Examples of 20th century breeding work include familiar vegetables and fruits such as seedless watermelons, pluots (hybrid of a plum and an apricot) and modern broccoli.
Open-Pollinated (a.k.a. OP):  Open-pollinated seed varieties are those that result from pollination by insects, wind, self-pollination (when both male and female flowers occur on the same plant) or other natural forms of pollination.  If you save seeds from open-pollinated varieties and grow them in following years, they will “come true,” meaning that the plants will 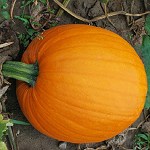 produce plants with characteristics or “traits” like the parent plant form which the seeds were harvested.  Keep in mind, however, that both the wind and insects will pollinate different open-pollinated varieties that are planted close together.   Because of this, with some common home garden plants, notably squash and pumpkins, saving seed can be a gamble, because unless different varieties are separated by specified distances, they may exchange pollen or “cross pollinate” each other.
Hybrid (F-1):  An “F-1”, or first generation hybrid occurs when a breeder selects two pure lines (plants that produce identical offspring when self-pollinated) and cross-pollinates them to produce a seed that combines desirable characteristics or “traits” from both parents.  Common traits breeders work to increase in hybrids might include, for example, disease resistance, uniformity, earliness, high nutrition or color.  Hybrid seed is often more expensive that non-hybrid seed, due to production methods—the pure lines must be consistently maintained so that F-1 seed can be produced each year, and the process of cross-pollinating is often done by hand.  Seeds can be saved and planted from F-1 hybrids, however, plants grown from that seed “will not come true”; in other words, may lack the desirable characteristics of the parents, which were crossed specifically to incorporate them.  Examples of popular home garden hybrids include Premium Crop Broccoli and Better Boy, Celebrity and Sungold Tomatoes.
Heirloom:  Heirlooms can be generally defined as open-pollinated varieties that have resulted from natural selection rather than a controlled hybridization process.  Some sources use 50 years as an arbitrary age marker to define what constitutes an heirloom variety.  Others classify any cultivated variety as an heirloom if it was developed prior to the 1940’s and 50s (starting in the 1960’s, plant breeders began producing and selling many modern hybrid varieties).  Like any other open-pollinated variety, seed saved from an heirloom produces plants with the same characteristics as the parent plant.  Seed saving organizations have played an important role in preserving many noncommercial heirloom varieties.  Examples of 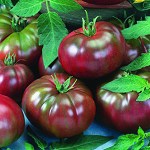 popular home garden heirlooms offered by many packet seed companies include Brandy wine and Black Krim tomatoes and Kentucky Wonder beans.  The romantic view of heirlooms is that they are varieties that have been passed down through generations of gardeners.  Though this was certainly true in the past, it is often not the case in our modern world.  Commercial seed producing companies now grow out seeds for many celebrated heirlooms, including, for example, Brandywine tomatoes and Lemon cucumbers, and sell them to seed packet companies to offer to home gardeners.
Organic:  When you see the word “Certified Organic” on a seed packet, it has distinct legal meaning.  It can only be used for seed by growers who are in compliance with all the detailed rules and regulations specified by the USDA’s National Organic Program.  While other countries have their own organic systems, in the US, organic regulations specify that the land in which crops are grown cannot have had prohibited substances applied for three years prior to harvest, and the operation must be managed according to an Organic System Plan that is approved and regularly inspected by a USDA accredited certifier.  Organic seeds are grown strictly without the use of synthetic fertilizers and pesticides; the use of sewage sludge, irradiation, and genetic engineering are also prohibited.
Pelleted:  Pelleted seeds are enclosed in a round pellet made from simple clay or another inert material to bulk them up.  The process makes very small seeds such as lettuce, carrots, and onions easier to sow and is a way to make expensive tiny flower seeds easier to see and handle.  Pelleted seeds may also be ‘primed”.  Priming is a hydration treatment bringing seeds t the brink of germination, then they are dried for storage and distribution.  Primed seeds break dormancy and germinate quickly when sown, but should be used the same season they are purchased, as priming can decrease storage life.
Treated/Untreated:  Seeds labeled “Treated” are generally coated with a fungicide—check the packaging for specifics about the treatment.  Treated seed is available primarily for commercial crops because farmers want to protect germinating seed in the field from pathogens when planted in cold or wet soil.  Packet seed companies that sell to home gardeners generally specify if any of the seed they are offering is treated.  Current rules for USDA certified organic production prohibit the use of treated seed.  This might change in the future as biological seed treatments are approved for organic production and become available.
Safe Seed Pledge:  The Safe Seed Pledge arose as a response to the release of the first genetically engineered plants in the mid-90s.  Signers pledge not to buy or sell genetically engineered seeds.  A list of companies that have signed the pledge is maintained by the Council for Responsible Genetics, a non-profit with a stated mission of educating the public about and advocating for socially responsible use of new genetic technologies.