by The Bees Waggle 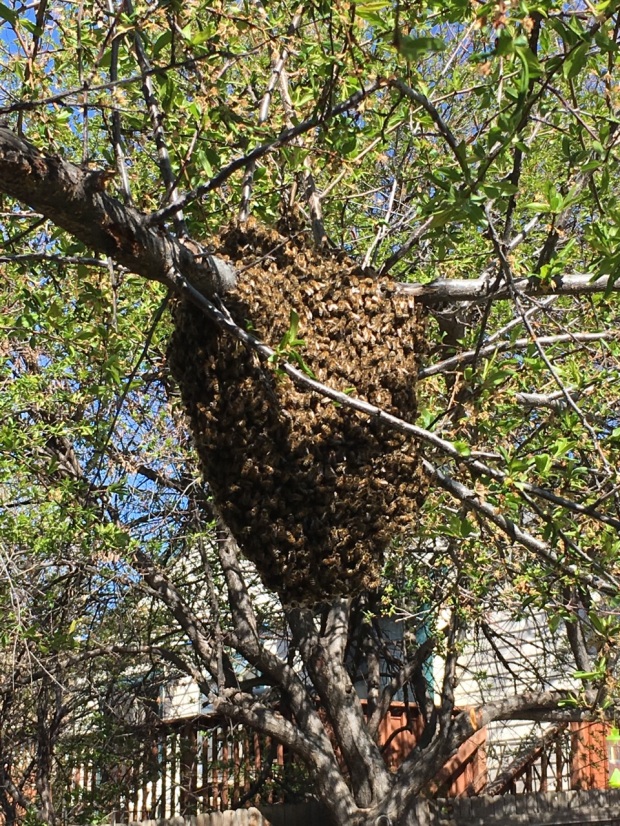 Swarming is a large cluster of honeybees (tens of thousands!) hanging in a ball from a surface, and it begins in the spring.  It is the reproduction of honeybee colonies. “How,”  you ask?

The hive is considered a superorganism, which means all parts are uniquely necessary to the survival of the colony as a whole. Not a single honeybee can survive without the hive. The colony grows and eventually needs to split to reproduce more super organisms at additional nesting sites. This is where swarming comes in.

The “old queen” is programmed in her second year of ruling the hive, to prepare for swarming. This means she will leave, along with tens of thousands of her worker bees, including foragers and house bees alike. Some of the colony will be left behind with a virgin queen bee. The queen is very heavy whilst living in the hive fulfilling her egg-laying duties and is unable to fly. Thus, she must go on a diet when she knows it is time to swarm. The house bees cease to feed her and she stops laying eggs. Once she is slim and trim enough to take flight, all the bees gorge themselves on honey for the exhausting task ahead.

How does the hive decide to swarm?

Pheromones, otherwise known as chemical messages. Bees use many pheromones to communicate different messages throughout the colony. The queen releases pheromones from mandibular glands (adjacent to the jawline), which are passed to her worker bees through feeding. Her pheromone “cocktails” can instruct worker bees to collect food, create swarming cohesion, and prevent the maturation of eggs in other female worker bees. This form of communication unifies the colony’s survival tactics. One mode of survival is reproducing the hive, and this happens when the colony has become so large that some of the worker bees are not feeding the queen and thus not receiving her pheromones. Such a population believes there is no queen and begins raising a queen of their own. The existing queen must leave before the virgin queen emerges from her cup.

Meanwhile, the “old queen” is trimming down and sending out scouts to find a location to cluster. A cluster is a ball of bees hanging in strange places.  It could happen on a stroller, car, tree, house, pretty much any surface!  The cluster location isn’t far from the hive, and the swarm will only cluster as long as it takes to find a new nest, which is very brief. So, if you happen upon one, you are one lucky individual to be witnessing such an important part of a hive’s life cycle. Enjoy the view!

During the honeybee swarms cluster, some of the best foraging bees are sent out as scouts to find the next nesting site. Upon returning to the cluster, the scouts will do a waggle dance. The degree of enthusiasm the bee is waggling will encourage other scouts to verify the nesting site is indeed a good one. Finally, the entire swarm will leave together to begin building their new home.

What should you do if you see a swarm?

Please do not be afraid, but do show respect. Bees are not in the mood to attack at this very vulnerable moment in their life cycle. Stand back, give the honeybee swarms space, and watch and listen (the hum of a buzzing colony is music!).  If you are concerned, contact your local beekeeping association for a list of bee rescue contacts.  Do not spray or exterminate honeybees, or any bees for that matter, they are critical to our survival!  1 in 3 bites of the food we eat comes from bee pollination!

I hope you enjoyed learning something new today!   Thank you for joining the movement to save our bees!
Jessica